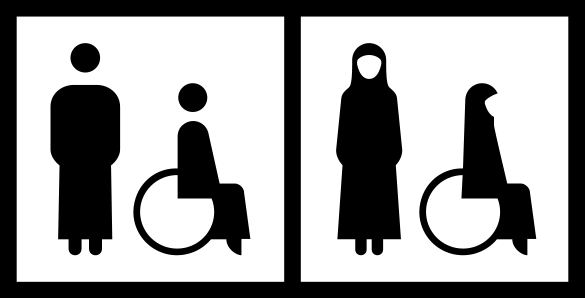 fiona dodd: obviously you are renowned for your work on wayfinding projects, can you recall how much/what type of research you undertook for these projects?

andreas uebele: we don’t do any research. we are only thinking, how to solve the very special problem of a job. every signage-project has such different circumstances, that an overall »law« or experience from other projects woudn’t be suitable. research is thinking and talking: we talk with every person, who is – or might be – involved in the project. for us, research means to develop many variations of a problem and to discuss them in the office and with the users and clients. it goes without saying that we read every literature about signage and that we try to get any particular information about the project, legal, cultural, historical and technical aspects as well as budget, spirit and location.

in the international graphic symbols, joel arnstein argues that ‘graphic symbols have created a language of their own’. symbols such as hazard notices and washing instructions have a ‘universal meaning’ and usage. what is you opinion on pictograms being described as a universal language?

pictograms are a universal language, because they allow, without knowledge of the certain language, to communicate with everybody. but this universal language has to be adapted or, better, translated into the very specific cultural specialities of the country or region. we designed the signage system for the makkah clock tower exhibition and the specific problem was to devide men and women because of their clothing (see image).

in 2007 vienna city council launched a campaign, which showed images of women as well as men on public information signs. for instance, in their town hall the signs for nappy-changing facilities were redesigned. the old version, which showed a mother and child, introduced a new image of a man changing his baby. sonja wehsely, the vienna city councillor for women's affairs, states "we are used to seeing pictograms of men for everything, and only pictograms of women when it is to do with children. that's not reality." having this in mind, do you think pictograms discriminate against gender?

i don’t like the gender dicussion. in words (in the german language) only the male version is used for plural. is this discriminating female? many people say yes. for me, it is very obvious that you can’t design language. to mix male and female pictograms is possible and it could be a funny contribution to this debate with a serious context. at the moment, we are designing our own pictograms based on gerd arntz and we use a female person for handicapped (not because we are thinking all women are handicapped!). and yes. also the woman escaping from fire in the emergency pictogram could be a good way to this debate, though i don’t like her boots and her hairstyle.

charles trueheart highlights in sign language the dilemma where cultural and religious associations threaten to undermine global intelligibility in pictograms. trueheart raises the point that ‘neither do all people eat with a knife and a fork, the supposedly universal symbol for restaurant’ (trueheart, 2008, p.18). in relation to this, to what extent do you think pictograms can be biased towards western culture?

yes, they have been designed from an eurocentric or western angle of view. but the pictograms and the designers are not guilty. if you are designing a new alphabet, you first design the latin glyphs, if you are a designer from the western hemisphere. later, if your typeface is successful, the greek and coptic version, the tamil and indian letters, after that, maybe the arabic version and so on. seen over the time we are using visual languages, designing pictograms is a very young discipline.